Shirley has done considerable research on the life of Arthur Edward Stollery (known as 'Teddy', her great uncle) and she assisted one of his sons, Albert (born 1914), to know more about his family. She took Albert to see where his father is commemorated in Marlesford for the first time after 70 years. She also managed to obtained pictures of his parents, Arthur and Annie. This page is a tribute to the work Shirley has done and shares the story of Albert.

In 2002 Shirley decided to search her father's maternal family tree for his 90th birthday. Her father's parents were married in Walton Parish Church in 1905; in 1907 they emigrated to Canada. Shirley's father, Hubert, and his brother, Arthur never knew their grandparents, aunts, uncles or cousins and had always been told they came from a small family. That was the start of her research 'bug'..... and the start of her fascination with great uncle Arthur Edward Stollery, who holds a very special place in her heart. Shirley's father was 5 years old when uncle Arthur was killed in the Great War and he said his mother never spoke about her brother who was killed in the war.

Shirley first visited the grave of Arthur Edward Stollery in 2002 and found there was no age on his gravestone. After several months collecting the documentation required by the Commonwealth War Graves Commission (CWGC), Arthur's age and information about his next-of-kin was added to his records. Shirley was very impressed that within two months the CWGC arranged to have Arthur's age (32) at the time of his death added to his gravestone. Shirley has visited his grave several times and with information from secret orders and maps, found and has seen where he was killed. He was the only man in his regiment killed that day - 20th November 1917. He served with the 12th Royal Fusiliers, City of London Regiment. She considers the cemetery to be a very special place. There are two other 12th Royal Fusiliers men in the same cemetery and she always takes flowers for all three graves.

Albert returned to Marlesford with Shirley in 2003 for the first time since he and his and brother left in 1932 after his mother's death. Albert's mother, Annie, never got over the death of Arthur, she found it difficult bringing up two young boys without their father to provide for them or to help at home. In addition to this when the farmer, for whom Arthur worked learned of his death, he told Annie that she and her two young sons, Albert aged 3, and Arthur Byng aged 6, would have to vacate the labourer's cottage. Annie had nowhere to go. The rector in Marlesford told Annie she could have a job doing household chores at the rectory and she and the boys lived there for a while.

Eventually, Annie received a war widow's pension and she and the boys moved to Rose Cottage in Marlesford. Albert remembers happy times at Rose Cottage. His mother never spoke about his father, only telling him and his brother that 'he enlisted when he didn't have to'. Every 11th November Annie took the boys to the church and showed them their father's name on the memorial scroll. Annie was found dead in 1932, she had drowned in the River Ore in Marlesford, it was reported that she had been in an 'unsound state of mind' at the time - there was no post mortem.

In 2003 Shirley and Albert visited the Rectory where the family had spent time before moving into Rose Cottage. They were shown around the parlor but Albert had no memory of this, it would have probably been 'off limits' to him and his brother, during their stay there. However as they walked into the kitchen, Albert said, "I remember now. If we go out that back door, there will be a huge grape vine on the right", - sure enough there was. He then saw a barn to the right and said, "The floor of that barn was covered with a thick layer of sawdust". They walked along the street in Marlesford to Rose Cottage and Albert told stories about growing up in Marlesford and had lots of little stories about neighbours. He said that he and his brother had played in the area behind the house and when lunch or dinner was ready, his mother stood on a hill and blew a big whistle!

When Shirley first made contact with Albert, she asked if he had photos of his parents. He said, "Deary, I am 89 years old and I have never had a photo of either of my parents". That broke Shirley's heart; not only did he lose his father to war but Albert had no photographic memories of him or his mother. Shirley promised him she would look for photos and launched into a search of local history and even appealed to people in the local paper. Incredibly a photo of his father was found, albeit an 'enhanced' one, but it was the only one that was found. Finding a photo of Albert's mother took a bit more time but as you can see from the newspaper articles below Albert eventually received not one, but four photos of his mother. The photo of Albert's Mum, his brother and himself standing outside Rose Cottage, was the only photo he could remember being taken and that was his favourite. 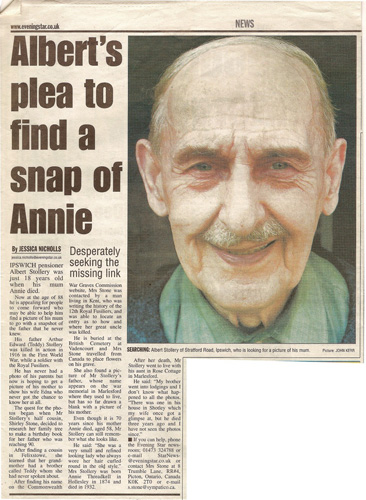 Now at the age of 88 he is appealing for people to come forward who may be able to help him find a picture of his mum to go with a snapshot of the father that he never knew.

His father Arthur Edward (Teddy) Stollery was killed in action in 1916 in the First World War. While a soldier with the Royal Fusiliers. He has never had a photo of his parents but now is hoping to get a picture of his mother to show his wife Edna who never got the chance to know her at all.

The quest for the photos began when Mr Stollery's half cousin, Shirley Stone, decided to research her family tree to make a birthday book for her father who was reaching 90. After finding a cousin in Felixstowe, she learned that her grandmother had a brother called Teddy whom she had never spoken about.

After finding his name on the Commonwealth War Graves Commission website, Mrs Stone was contacted by a man living in Kent, who was writing the history of the 12th Royal Fusiliers, and was able to locate an entry as to how and where her great uncle was killed. He is buried at the British Cemetery at Vadencourt and Mrs Stone travelled from Canada to place flowers on his grave.

She also found a picture of Mr Stollery's father, whose name appears on the war memorial in Marlesford where they used to live, but has so far drawn a blank with a picture of his mother. Even though it is 70 years since his mother Annie died, aged 58, Mr Stollery can still remember what she looks like.

He said: "She was a very small and refined looking lady who always wore her hair curled-round in the old style." Mrs Stollery was born Annie Threadkell in Hollesley in 1874 and died in 1932.

After her death, Mr Stollery went to live with his aunt in Rose Cottage in Marlesford.

He said: "My brother went into lodgings and I don't know what happened to all the photos. "There was one in his house in Shotley which my wife once got a glimpse at, but he died three years ago and I have not seen the photos since." 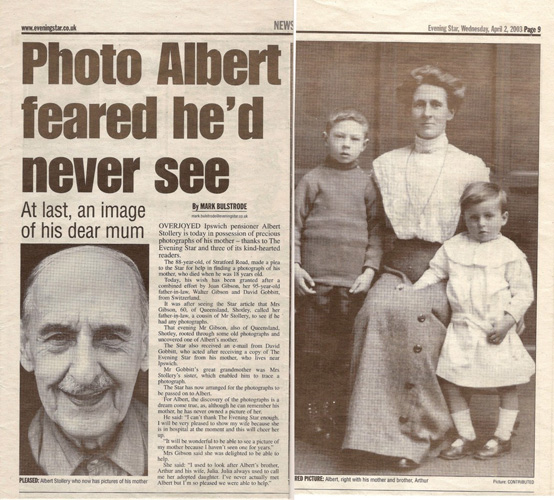 "Overjoyed Ipswich pensioner Albert Stollery is today in possession of precious photographs of his mother - thanks to The Evening Star and three of its kind-hearted readers. The 88 year-old of Stratford Road made a plea to the Star for help in finding a photograph of his Mother who died when he was 18 years old.

Today, his wish has been granted after a combined effort by Joan Gibson, her 95-year-old father-in-law Walter Gibson and David Gobbitt from Switzerland.

It was met seeing the Star article that Mrs Gibson, 60 of Queensland, Shotley called her father-in-law, a cousin of Mr Stollery to see if he had any photographs.

That evening Mr Gibson, also of Queensland, Shotley, rooted through some old photographs and uncovered one of Albert's mother.

The Star also received an e-mail from David Gobbitt who acted after receiving it copy of The Evening Star from his mother who lives near Ipswich. Mr Gobbitt's great grandmother was Mrs Stollery's sister, which enabled him to trace a photograph.

The Star has now arranged for the photographs to be passed on to Albert. For Albert, the discovery of the photographs is a dream come true as although he can remember his mother, he has never owned a picture of her.

He said: ''I can't thank The Evening Star enough. I will be very pleased to show my wife because she is in hospital at the moment and this will cheer her up. It will be wonderful to be able to see a picture of my mother because I haven't seen one for years." Mrs Gibson said she was delighted to be able to help.

She said: "I used to look after Alberts brother, Arthur and his wife Julia. Julia always used to call me her adopted daughter. I've never actually met Albert but I'm so pleased we were able to help." 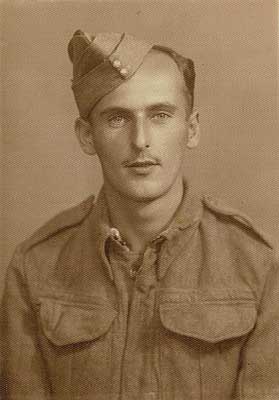 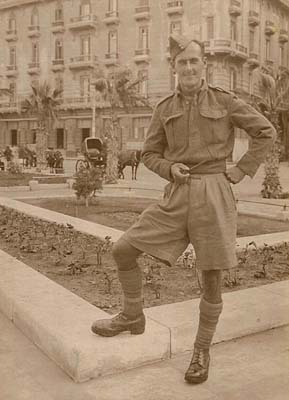 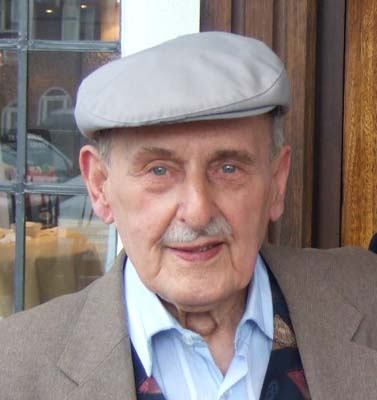 Left and Centre: Albert Stollery, during service in Alexandria during World War 2.