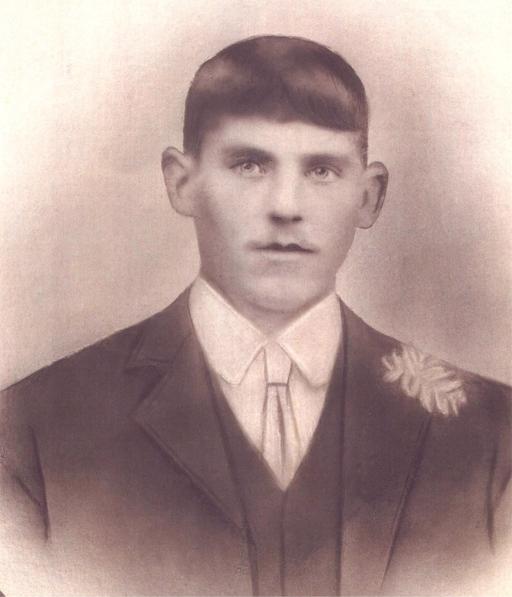 Arthur Edward was killed in action within the Somme area of France on 20th November 1917, Age 32. He is buried at Vadencourt British Cemetery, Maissemy.

Arthur Edward’s father was killed in an accident in Shottisham on 7th April 1892, leaving his mother with four children, aged from 14 months to 9 years.

Arthur, an agricultural labourer, was also known as Teddy.

Arther Edward married Anna (known as Annie) Threadkell of Hollesley in Ufford on the 29th October 1910.  Annie was the daughter of William Threadkell and his wife Caroline (née: Friend) who lived at the Fox Inn, Hollesley.  Arthur and Annie had two children, Arthur Byng Stollery and Albert Edward Stollery. 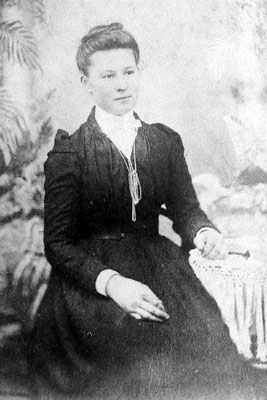 Arthur Edward's elder son, Arthur Byng, was born on 6th July 1911 and at that time the family was living in Pettistree; Arthur Edward was a farm labourer/stockman working at Byng Manor, as per birth registration for his son.

His younger son, Albert Edward, was born on 19th August 1914 and at that time the family was living at Hill Farm Cottage, Ufford, as per birth registration for Albert Edward.

Arthur Edward enlisted for service in WWI at Woodbridge and was attached to the 3rd Northants regiment, as Private 46092. Being a husband and father, he was not called for overseas duty until 1917.

At the time he left for overseas duties the family lived in a farm labourer's cottage at Marlesford Hall Farm which was owned by a Captain Schreiber in Marlesford. The Schreibers had two or three sons and a daughter. Arthurs son Albert, remembers being invited to parties with movies there.

On 27th June 1917, whilst waiting in Folkestone for the ship to take him to France, Arthur Edward wrote this letter to his wife, Annie (note censoring on second line).

"Dear Annie, You will see by this that I have not gone yet. We got up on Monday morning .......... at 2 o'clock and got to Folkstone about 9 and so we have spent the day here it is all right to nothing to do perhaps we shall not go until Wednesday as there is no fresh orders yet. Dear remember me to F Ling and also Lee and tell them that I am quite well this is a lovely place. Dear I will send you a card as soon as I get over. Kiss the boys from me I wish I was there so I could them myself and also you to. Good bye Dear with fondest love from your ever loving A. E. S xxxx"

Arthur arrived in France a few days later, trained near Calais; was transferred from the 3rd Northants Regiment on 10th July 1917, at Henneviex; taken on service with the 12 Royal Fusiliers, City of London Regiment and was given a new service number – G66346.

Within days of his arrival in France, Arthur fought in the Third Battle of Ypres (also known as Passchendaele), starting on 31st July 1917. Arthur survived Ypres and the regiment moved to the Sommerville Wood area near Maissemy, Ainse, France. He was in the trenches there on his 32nd birthday.

On the night of 19/20th November 1917, Arthur took part in a night raid. He was part of a carrying party from his regiment and was assisting the 104th F Coy, Royal Engineers, along with members of the 3rd Battalion Rifle Brigade. The carrying party's mission was to crawl across 200 yards of open field in No Man's Land, while carrying Bangalore Torpedoes that were to be placed at the German front line at a place called Square Copse.

The Bangalore Torpedoes were placed, without notice from the German trenches, and Arthur and his group again crawled across that 200 yard of No Man's Land and reached safety at a point called Eleven Trees. The Royal Engineers waited at Eleven Trees until the appointed hour of detonation and the carrying party returned to the safety of their own lines.

When Arthur was near his own line he was killed by a random German Trench Mortar. The mission was a success and he was the only casualty of the night raid. He is buried at Vadencourt British Cemetery, Grave 1-A-7. His death was the last-recorded death in the 12th Royal Fusiliers, City of London war diaries. There may have been members of the regiment who later died from prior wounds and certain members of the regiment were killed in action after the regiment was disbanded and men were sent to other regiments. 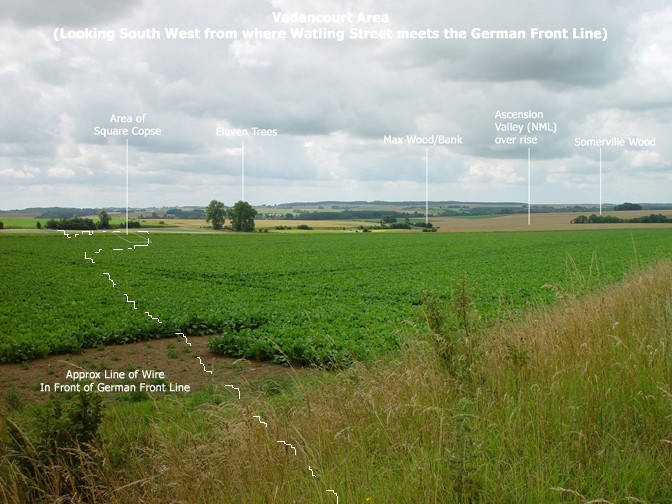 Above, location of Arthurs death on the night of 20th November 1917.

Annie received a photo of Arthur's temporary grave and the information for visiting his grave. On the right is the grave as it appears today at Vadencourt British War Cemetery, with his age added by the Commonwealth War Graves Commission in 2003 after a campaign by his family.

When the farmer for whom Arthur worked learned of his death, he advised Annie that she and her two young sons, aged 3 and 6, would have to vacate the labourer's cottage and Annie had nowhere to go. The rector in Marlesford told Annie she could have a job doing household chores at the Rectory and she and the boys could live there.

Eventually, Annie received a war widow's pension and she and the boys moved to Rose Cottage in Marlesford. Her younger son, Albert, remembers it being a happy time at Rose Cottage. His mother never spoke about his father, only telling him and his brother that 'he enlisted when he didn't have to'. Every 11th November Annie took the boys to the church and showed them their father's name on the memorial scroll.

Tragically Anna Stollery was found dead on 25th August 1932 in the river Ore, Marlesford, R.D. She was 58 years, and lived at No 1 Rose Terrace, Marlesford. It was believed that she drowned being at the time 'in an unsound state of mind', there was no Post Mortem. A death certificate was received from Walter Brooks, Coroner for the Liberty of Saint Etheldreda, Suffolk. The inquest was held on the 26th August and 16th September 1932. Anna's death was registered 17th September 1932.

Albert and Arthur Byng went to Shotley to live with his aunt and uncle (Nelly (Threadkell) Gibson and her husband,Walter Gibson).

In August 2003 Albert and his niece took flowers for his mother's unmarked grave at the Marlesford churchyard. Albert had not been back to Marlesford since the death of his mother in 1932. Arthur Byng died on 26th March 1993 in Holbrook and had one daughter. Albert Edward died in Ipswich on 26th July 2011 and had two sons and one daughter.

We would like to say a special thank you to Shirley Stone, Arthur's niece from Ontario, Canada, for sharing Arthur's story with us and allowing us to publish it here. Shirley worked hard to understand Arthur's life and enabled Albert to see pictures of his parents for the first time at the age of 89. More on this and Albert can be found here.

As part of the UKs commemoration of the first world war The Tower of London has constructed an art installation called "Blood Swept Lands and Seas of Red", marking the centenary of the outbreak of the First World War. 888,246 ceramic poppies will progressively fill the Tower’s famous moat. http://poppies.hrp.org.uk/

There is an evening ceremony, names can be nominated and read out. Arthur was nominated by Shirley and his name was read out on 29th September 2014, the video of this can be seen here: http://poppies.hrp.org.uk/roll-of-honour/29th-september/ Arthurs name is read out at 3 minutes, 15 seconds and the 29th name on the list.

If you have any further information about Arthur then we would love to hear from you, please contact us here using the form.