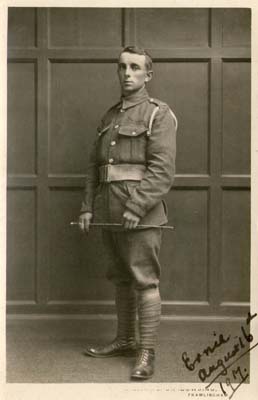 Ernie was born on June 19th 1891 in Eyke, the son of William and Caroline Smith. At the time of the 1911 census he was working as a farm labourer and still living at home, in Eyke with his father and stepmother, his mother died in 1904. At some time after 1911 he moved to Marlesford, working at Marlesford mill. It is believed that he lived with his older sister Edith, who in 1907 married Harry Boatwright, another of the men from Marlesford listed on the Roll of Honour. At the time of the 1911 census Harry, Edith and their children were living “near the bridge” at Marlesford. Harry, Edith and one of their daughters are also buried in the churchyard.

Ernie enlisted as Private 2380 then 200584 in the 4th Battalion of the Suffolk Regiment. He is listed on the Marlesford Roll of Honour.

Little is known about Ernie's military service. His medal card indicates he arrived in France on 28th February 1915. He was home on leave in August 1917 when the above photograph was taken. 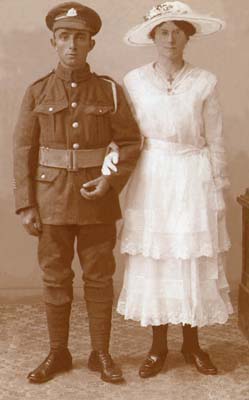 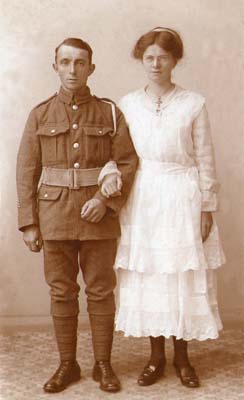 He was home on leave again on 3rd September 1918 when he married Edith Isabella Sawyer at Snape Church. The marriage certificate gives his profession as “miller, now soldier” and his residence as Marlesford.

Ernie was discharged from the army on 30th March 1919.

After the war the couple settled in Marlesford, residing in East View Cottages and they had three children. Ernie returned to work at the mill where it is believed he stayed until he retired.

Ernie died on May 1st 1959 in the Ipswich and East Suffolk Hospital (Heath Road Wing) aged 67 years. He is buried in the churchyard at Marlesford.

Many thanks to Ernest's Grand-Daughter, Angela, for providing Ernest's story.